This website will be moved to a new server on Monday June 21st. The website may be offline or not fully functional on that day. Thank you for understanding.


Home About Us» What We Do
About Us

The International Boundary Commission cares about the environment.﻿ 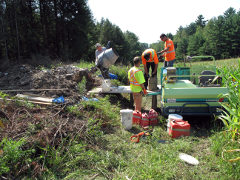 The International Boundary Commission uses light equipment for monument maintenance and no chemicals for vegetation management.

We maintain the 8,891 kilometre (5,525 miles) boundary between Canada and the United States that stretches from the source of the St. Croix River that separates Maine and New Brunswick on the Atlantic Ocean to Juan de Fuca Strait on the Pacific and then on, from the Dixon Entrance to the summit of majestic Mount St. Elias from where it heads due north to the Arctic Ocean marking the divide between the Yukon Territory and the state of Alaska. It is dotted by literally thousands of monuments and, over water, turning points that clearly and officially define and demarcate our common boundary.

We repair damaged monuments and constantly add new ones as needed to improve boundary demarcation; we keep vistas open; we survey boundary monuments to tie the boundary in to a geographic information system that is becoming more precise and accurate with every technological advance in the field of geomatics.

Finally, we publish the results of our efforts in a joint annual report that is submitted to the United States Secretary of State and the Minister of Foreign Affairs of Canada.

These endeavours are also essential to the updating of the 256 official maps of the boundary, some of which date back to original surveys carried out by surveyor/explorers almost two centuries ago.

Our teams are made up of experts surveyors, geodesists, geographic information systems (GIS) specialists, cartographers and specialized workers who put their expertise to work to carry out various activities that fall under six categories: ﻿

The various sections of the boundary are inspected on a regular basis to identify damaged or destroyed monuments. If the monument requires cosmetic repairs only (like painting or patching a chip), it is often done at the same time. The condition of the vista is also assessed at this stage: size and type of re-growth, overhanging branches, obstacles, etc.﻿

Reclearing of the 2,172 kilometres (1,349 miles) of boundary vista through forest and brush requires a major portion of the Commission's efforts. Early clearing operations were carried out using manual tools such as axes, machetes and hand saws. Over the last quarter-century, power-saws have greatly facilitated clearing operations.

The monuments are the prime witnesses of the location of the boundary, and are subject to the harsh climate characterizing our common environment. Rain, freezing cold and scorching heat affect monument condition, and repairs are required on a regular basis. Monument maintenance may be as simple as painting the base to protect it and make it more visible, but it can be the complete renewal of a decayed monument. When rebuilding a monument, we usually reinstall the old one in a new concrete base, but we can also install a brand new monument complying with our current standards.

In addition to monument maintenance, we also install additional markers where required. We install decorative monuments at ports of entry, but we also install signs in various locations to support local communities and law enforcement agencies.﻿

In addition, developments in technology and surveying instruments today allow a level of precision that our predecessors never would have thought possible. That is why you see our surveyors carry out regular surveys of the boundary - not to change its position, but rather to improve its geographic description﻿

The Canada/United States boundary has attained a high profile in the recent years. While the IBC has been doing its work for over 100 years, the events of the past decades have made it even more important that we communicate what we do, where and when we will be doing it, as well as publish the results of our work.

Because we are a bi-national treaty organization, we serve the people of both Canada and the United States. Our clientele is as diverse as border security agencies, pipeline and electrical transmission companies who install infrastructures across the boundary, landowners whose property abuts the boundary as well as hunters, hikers, campers and boaters who enjoy their leisure time along or near the boundary. With the advent of GPS, GIS and online mapping bundled in powerful hand-held devices, all these groups are more demanding in their needs and requests for information.

Once accurately documented, analyzed and compounded, our field work translates into a wealth of information that we share though numerous channels.﻿