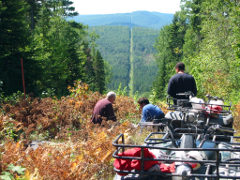 Working Near the Boundary

As the border’s purpose is to define the limits of our national land, it must be clearly visible and absolutely established. The International Boundary Commission is responsible for the regulation of works within 3 metres (10 feet) of the boundary. Works are stated as any: ditch, earthwork, building or structure of any description or any lines of telephone or power, including posts, piers or abutments for sustaining or protecting the wires or cables of those lines. This work may include billboards, building additions, airstrips, railway stations, transmission lines and pipelines. As part of the regulations, no additional work is allowed to the buildings still on the boundary vista when the proposed work is within 3 metres (10 feet) of the boundary line without the permission of the Commission.

Performing any type of work within the limits of the Canada/United States boundary vista requires a joint letter of authorization by the Commissioners.  To obtain permission, applicants must provide the following documents to the Commission:

2) Two copies of a drawing showing the location of the proposed work in relation to a boundary monument or boundary reference monument. The application should be submitted to the section of the Commission in the applicant's country.﻿
The International Boundary Commission is responsible for regulating any work within the boundary vista through the following authorities﻿: